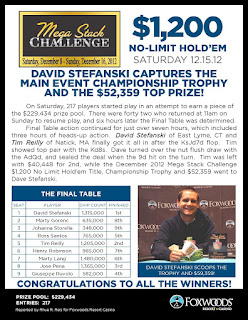 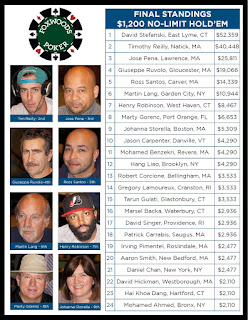 After chopping this very event one year ago, Dave Stefanski has gone back-to-back in the December Mega Stack Challenge Main Event.

For his victory, Stefanski takes home $52,359 as well as the Mega Stack Challenge Trophy.

Thanks to everyone who play in the December Mega Stack Challenge and we will see you in February!
Posted by WhoJedi at 1:37 AM

Once Tim Reilly and Dave Stefanski got heads-up in the Foxwoods Mega Stack Main Event, they decided to take $5,000 off of 1st place and add it to 2nd place.

After that, the two engaged in a nearly three-hour heads-up battle with both trading the chip lead numerous times.

The [9d] fell on the turn, giving Stefanski the flush and the victory.

Tim Reilly officially finishes in second place and take home $40,448!
Posted by WhoJedi at 1:31 AM