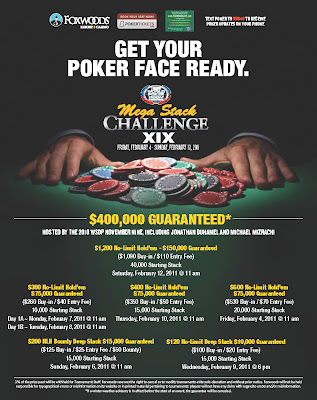 November Nine To Reunite at Foxwoods in February!

MASHANTUCKET, CT — The 2010 World Series of Poker Main Event final table players will reunite to play against each other at Foxwoods Resort Casino in Mashantucket, Conn. on Tuesday, Feb. 8 during its Mega Stack Challenge XIX. Never before during the modern era of poker have the WSOP final table players, currently dubbed the November Nine, ever been reassembled.

To add to the uniqueness of this extraordinary event, Foxwoods Resort Casino will offer a series of qualifying tournaments – from Jan. 11 through February 3 – that give Foxwoods poker players an opportunity to hit the felt against members of the 2010 WSOP November Nine. The reunion event, which will be a three-table tournament, will be held on the afternoon of Tuesday, Feb. 8 in the newly opened Foxwoods poker tournament room.

“This will be a legendary reunion watched by the entire poker community,” said professional poker player and media personality Bernard Lee, who is also spokesperson for Foxwoods Resort Casino and its World Poker Tour-branded Poker Room. “Not only will the November Nine meet at Foxwoods to resurrect memories of their last game, the players will also test their skills against the casino’s strongest poker players.”

In addition to playing in the reunion event, the November Nine will also host the Foxwoods Mega Stack Challenge XIX tournament series held from Feb. 4–13.

“We are thrilled to host these poker superstars at Foxwoods and are proud to be a part of such a historic event. We are pleased to be able to share this reunion of the 2010 November Nine with not only the Foxwoods players, but also the entire poker community,” said Terry Chiaradio, director of Poker Operations, Foxwoods Resort Casino.

Lee catapulted into the poker spotlight after he finished 13th in the 2005 WSOP and became the top New England finisher. Lee has become a media personality since becoming professional and playing on the tournament circuit, during which time he has won more than $1.75 million and three titles. Since February 2009, Lee is the spokesperson for Foxwoods Resort Casino and their World Poker Tour-branded Poker Room.

Co-host of ESPN.com’s weekly online poker show, “ESPN Inside Deal;” Lee is also host of the The Bernard Lee Poker Show on radio in Massachusetts and simulcast on Rounders Radio, www.roundersradio.com, the largest online poker talk radio station in the world.

Lee is poker columnist for the Boston Herald, ESPN.com, PokerNewsDaily.com, All-In magazine and other media outlets. He has also released two books, The Final Table, Volume I and Volume II, which are compilations of his Sunday Herald poker columns. He is also a poker commentator for the WSOP and Eastern Poker Tour.