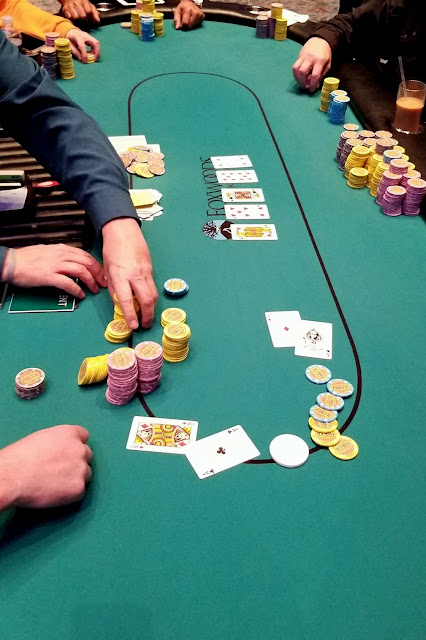 A player opens to 8,500 in early position, and Giuseppe Ruvolo re-raises to 23,000 on the button.  Dale Beaudoin moves all in from the small blind for around 100,000, and the original raiser quickly folds.  Ruvolo snap-calls, and the players table their cards:

"Well, there are no more aces in the deck,  I can tell you that much," a player at the table that is not involved in the hand says.

The flop comes K♠10♦4♦, leaving Ruvolo in the lead with his pair of aces.

The 7♥ turn maintains that lead, but the J♥ on the river gives Beaudoin Broadway to double up.

As the dealer is counting down Beaudoin's 103,200 in chips, Ruvolo says, "That's the second time that I've had aces cracked since dinner. Dealer, please dont give me aces again. The first time the guy hit quads one me...no more aces!"